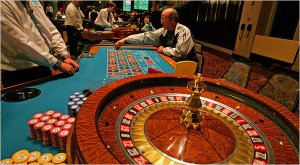 A YES VOTE would prohibit casinos, any gaming establishment with slot machines, and wagering on simulcast greyhound races.

A NO VOTE would make no change in the current laws regarding gaming.

Supporters of a YES vote argue the social costs of casinos outweigh the economic benefit.  See this article from Boston radio station WBZ (AM 1030).

So, what exactly would influence someone to note no, what actions will follow as a result? Proponents of voting NO on question 3 say casinos will create jobs, economic growth and much-needed new revenue in Massachusetts.

A NO vote will preserve the state’s Expanded Gaming Law.  Vote NO supports say that will generate thousands of construction and permanent jobs and hundreds of millions of dollars in revenue for our cities and towns. Their data shows that each year Massachusetts residents spend close to $900,000,000 at casinos in Connecticut, Rhode Island and Maine; adding millions to their state budgets.