Would you want to see a tobacco-free Assumption? Efforts are already underway to change the college’s smoking and tobacco-use policies, with the ultimate goal being a completely tobacco-free campus. The Assumption Against Cancer student group is leading this policy reform by circulating petitions throughout the student body, faculty, and staff. As of December 3, there were 197 signatures.

Smoke-free and tobacco-free are two different policies. According to the Bacchus Network, a program focused on promoting collegiate student success through campus health and safety efforts, smoke-free only addresses tobacco products that produce smoke such as cigarettes or cigars. The goal here is to eliminate secondhand smoke.  On the other hand, tobacco-free is all-encompassing. In addition to cigarettes and cigars, it includes such products as spit tobacco, hookah, and other smokeless products.

The petitions for Assumption are currently focused on becoming completely tobacco-free. Worcester Polytechnic Institute and Worcester State University became tobacco-free at the beginning of the fall 2014 semester. Assumption Against Cancer seeks to follow their example.

Currently, the Assumption Student Handbook explains, “Smoking is prohibited in, or within 20 feet of, all campus buildings. Please be considerate of the environment in which we live and dispose of cigarette butts appropriately.”

However, Assumption Against Cancer co-president, Caitlyn Thompson, believes this policy is a problem. She says, “Although signs prohibit smoking…less than 20 feet away from buildings, it is extremely difficult to find such an area on campus [leaving] smoke wafting into dorm rooms and classrooms.” The barrels with ashtrays are placed right outside building doors. Thompson acknowledges that the disposal of cigarette butts also does not follow the handbook. As part of Assumption Against Cancer’s promotion, the members of the organization collected littered butts on campus over one day.  Thompson posted a picture to Instagram. 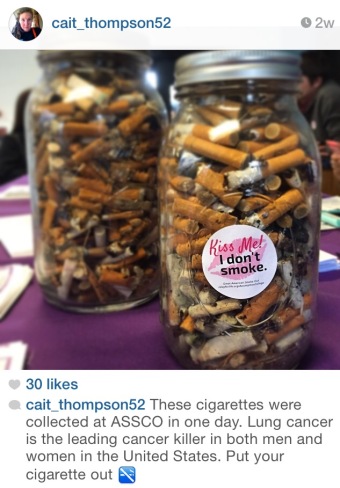 These cigarette butts were on display at a booth on November 20. The group spent a day in Hagan Campus Center advocating for lung cancer awareness and collecting the 197 signatures they currently have.

Interested in joining the effort towards a #smokefree #Assco campus? Visit our GASO booth tomorrow in Hagan from 10-3 to sign our petition!

The Assumption Against Cancer co-president, Amanda Carbone, suggested to the other members of the group after the success at the booth, “We should still keep going…because it is very easy to have the clipboard out or to ask people…and the more signatures we have the better.”

After collecting as many signatures as possible in that time period, Assumption Against Cancer will present the petitions to the Student Government Association. Thompson is optimistic about the petitions: “Hopefully this will help pressure the topic to the forefront of discussion…We hope to bring to the attention of the larger organizations on campus that the students view the use of tobacco products as problematic. It is a way to have the students’ voices heard…”

Patrick Giroux, Vice President for Student Affairs on SGA, also wants to make sure all voices are heard.  Although not expressing his personal opinion, Giroux explains, “As far as I’m concerned, if there’s student interest then we should look into it since SGA speaks for and represents the student body.”  He also says faculty and staff deserve an input because they are a big part of the Assumption community.

SGA has previously touched upon this issue in their Policy Review Sub-Committee, although they have not formally gone forward with any decisions or actions. “Many members of SGA have mixed emotions about becoming tobacco-free,” says Giroux, “However, we invite [Assumption Against Cancer] to come to a Senate meeting and further discuss this matter.”

Assumption Against Cancer has at least stirred up the conversation about tobacco policies at Assumption and students are talking.  After hearing about the petitions, senior Tim Manghan commented, “My grandfather died when my dad was four of lung cancer…so it’s been a family issue and I’ve always been a proponent of making things smoke-free.”

More support for the petitions came from junior Maggie Azar: “I don’t think that many people smoke here… [and] I’m rarely bothered by smoking around campus…but despite that I think it would still be good to become a smoke-free campus.”

Not all students were optimistic or welcomed these petitions.  Senior Trevor Benoit observed that “efforts to eradicate Assumption of tobacco is a noble effort, but it probably won’t work. If someone wants to destroy their smile, then sure let them have at it….It is not realistic, because people will keep using these products anyway.”

There are many organizations that work towards tobacco-free college campuses throughout the country. You can get more information at http://www.tobaccofreeU.org  or at http://www.TobaccoFreeCampus.org.

What do you think about the potential that Assumption will become tobacco-free?  Comment below!