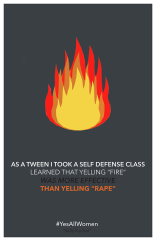 I walked through the dimly lit street of Providence on a cool July night.  I walked under the overpass on India Street and I heard a voice from the shadows.  “Where are you going, beautiful,” the voice boomed.  “Don’t look.  Do not turn around,” I thought to myself, “Just let me get me to my car, please.”  I picked up the pace.  The man kept shouting and stumbling, trailing behind me.  “I just wanted to say hello,” the man shouted.  He sounded angry now.  I clenched my hand into a fist with my car key poking out of my knuckle.  “Just go away,” I whispered.  With my other hand I took out my phone, just in case.  “Why you got to be like that,” he shouted, stumbled, and stumbled some more.  I see my car and, at this point, am practically running towards it.  I whip open the door, shove my key in the ignition, and take off, thanking my lucky stars I made it.

The #YesAllWomen hashtag caught fire on social media after Elliot Rodger, a twenty-two year old man, began wildly shooting on Isla Vista, home to many students attending the University of California Santa Barbara.  Rodger’s shooting spree killed six people before he turned the gun on himself.  Before the incident occurred, Rodger released not only numerous YouTube videos ranting of his hatred for women, but also shared his one hundred and thirty-seven page manifesto reinforcing his abhorrence for the female race.  His rage was particularly targeted towards a specific UC Santa Barbara sorority:

“On the day of retribution, I am going to enter the hottest sorority house at UCSB and I will slaughter every single spoiled, stuck-up, blond slut I see inside there. All those girls I’ve desired so much. They have all rejected me and looked down on me as an inferior man if I ever made a sexual advance toward them, while they throw themselves at these obnoxious brutes.”

The quote, by Rodgers, was taken from the last video he posted before the incident on Isla Vista.  His graphic, twisted final revenge video was removed from the site shortly after the incident occurred.

Responses to the incident launched the #YesAllWomen hashtag, showcasing a counter hegemonic view to a male dominated society that celebrates masculinity, power, and female compliance.  The hashtag generated millions of tweets all revolting against a partisan society.

The cops who asked me "Well, what were you wearing?" when I reported an attack and attempted rape. #YesAllWomen

#YesAllWomen because we don't need an excuse to say no. Not because "I have a boyfriend" because I'm not interested.

#YesAllWomen because we shouldn't need a hashtag trend to be heard and respected.

The movement sparked a feminist revolution.  Millions of people spoke their minds using the hashtag, but the movement spread beyond social media.  People everywhere, especially men, unaware of the fear women endure day to day, had their eyes opened.

Colleges and universities across the country remain a hotspot for sexual harassment and sexual assault towards women.  A Department of Justice report found, for every 1,000 women attending a college or university, there are approximately 35 incidents of rape each academic year.

The DOJ report finds around 95-percent of sexual assaults go unreported and are not included in this statistic.  Rohypnol in drinks (roofies), among other drugs, are the most common cause of rapes on college campuses.

Students on the Assumption College Campus commented on the issue.  Junior, Nicole Marshall, said, “I never really think about anything happening [to my drink] at a party.  Maybe it’s because it’s a smaller school.  Since you know more people, you have a little bit more trust that someone wouldn’t do that to you.”

“They [Administration] prepares us the best they can with the alcohol safety course we have to take before the start of freshman year,” she continued.

Assumption College, along with various other collegiate institutions, require all incoming freshman to take the AlcoholEdu program, which is aimed to teach students about the effects and consequences of consuming alcohol in order to reduce its negative consequences.

“I definitely think it was a good thing to have us take,” said Junior, Tara Trapani.  “It makes you think about real life situations and how you would handle them.  Honestly, I felt that it helped prepare me for college life.”

AlcoholEdu is used as a preventative measure against alcohol abuse.  It provides students with real life situations in order to reduce risk-taking, alcohol related behavior.  Haven, a separate section of the course, discusses sexual assault and how to address and confront any issues that may arise.  You can learn more about the program here.

The tragedy in Isla Vista brings to light another issue at colleges and universities: the influx in school shootings. Preventative safety measures are taken on campuses worldwide to avert that particular situation but, unfortunately, these measures are not always successful.

Assumption recently added a new safety measure on campus: the new gate system.  During the daytime hours, the gatehouse will be staffed and cars will be let in using an automatic sensor, however once 10 p.m. rolls around, students must scan their ID cards in order to get onto campus.

“The new system makes me feel a lot safer at school,” said Tara Trapani.  “Before, it felt like anyone could get on campus, all you had to do was wave to the guy at the gate and you were golden.  Now, especially with all the shootings going on, I feel much safer and more comfortable at school.”