Emily Field, a junior at Assumption College, has been balancing her life with anxiety since the seventh grade. Joined by the thousands of other young adults living with anxiety, Field has had to navigate the rising world of social media while treating her mental health condition.

Field’s anxiety does not stem from social media, but she does believe scrolling through social media platforms can be problematic at times when her anxiety is at its worst.

“Sometimes, social media helps distract me from the anxiety I’m facing,” said Field. “But other times, it only adds to my anxiousness because it depicts people like celebrities and influencers in perfect lights that are unattainable.”

Assumption College psychology professor Maria Parmley agrees with Field. Since most users choose to depict only the best parts of their lives on social media, those who view these posts can begin to feel “socially ostracized” in a way that was not prevalent before social media.

Some prominent users, however, are using their large platforms to shed light on mental health conditions. Earlier this month, singer Ariana Grande shared brain scans that revealed she suffers from Post Traumatic Stress Disorder after the shooting at her concert in Manchester, England. The scans were posted to the artist’s Instagram story, but Grande continues to be vocal on Twitter about her struggles with anxiety and depression. 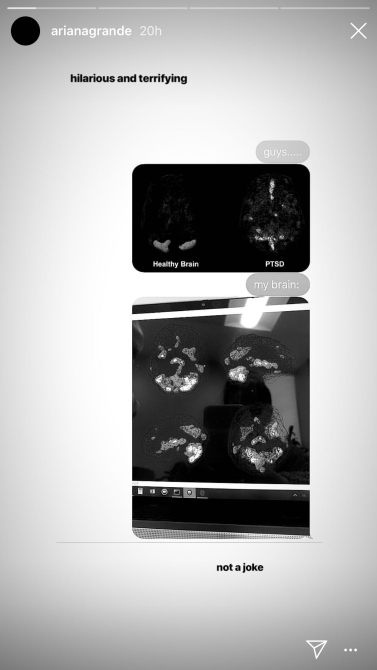 Her recent posts inspired actor Jim Carrey to reach out in support of Grande. In a tweet, shown below, Carrey stated he “admired [Grande’s] openness” with her anxiety and depression. The exchange has been praised as an example of open dialogue about mental health, with the National Alliance on Mental Illness retweeting it to their page.

.@ArianaGrande I read your lovely mention of me and things I’ve said about depression. A brilliant teacher and friend, Jeff Foster was OG on the “Deep Rest” concept. I admire your openness. I wish you freedom and peace. I feel blessed to have such a gifted admirer. Happy Easter! pic.twitter.com/BiMa6KHYb6

These open dialogues about mental health are reaching Assumption College through Active Minds, a new club aimed at helping end the stigma against mental illness on campus through peer engagement.

“We want to spread the word that mental illnesses are not something students should be ashamed of and their labels do not define who they are as people,” said Active Minds executive officer Brianna Rondeau.

Rondeau, along with fellow Active Minds executive officers Meghan Foster and Sarah Cordio, agree that social media and celebrity influencers are crucial to helping their impressionable audiences break the stigma against mental health through open conversations.

“Celebrities should use their platforms to promote overall wellness for everyone, encompassing mental, physical, emotional, and even spiritual health,” said Foster. “Promoting a compassionate and genuine message to their audience is something that is so important.”

Thanks you to all who wore green today for our Day of Solidarity to help speak out against the stigma surrounding mental illness! We hope you all enjoyed the free pins and raffles, and winners will be announced this upcoming Tuesday at De-Stress Fest! Be sure to come by our table then and say hello! #endthestigma #ACactiveminds #YouAreNotYourIllness 💚🧠

According to the National Alliance on Mental Health, 70% of the public are on at least one social media platform and research shows a correlation between social media use and mental health conditions. The Alliance urges users to use social media responsibly and watch out for triggers or warning signs on social media. Below are three ways to start living stigma free through social media.

Graphic from the National Alliance on Mental Illness

As for Field, she’s hopeful that celebrities using their platforms to raise awareness about mental illnesses can help reduce the stigma surrounding mental health.

“Social media can help,” said Field. “Say a celebrity shares their story and it’s really similar to what you’re dealing with, you can take it as it is and realize they are dealing with the same stuff, so you don’t feel alone.”

If you or someone you know is struggling with mental illness, Assumption offers free counseling services. To make an appointment, call 508-767-7329. For the National Suicide Prevention Hotline, call 1-800-273-8255.